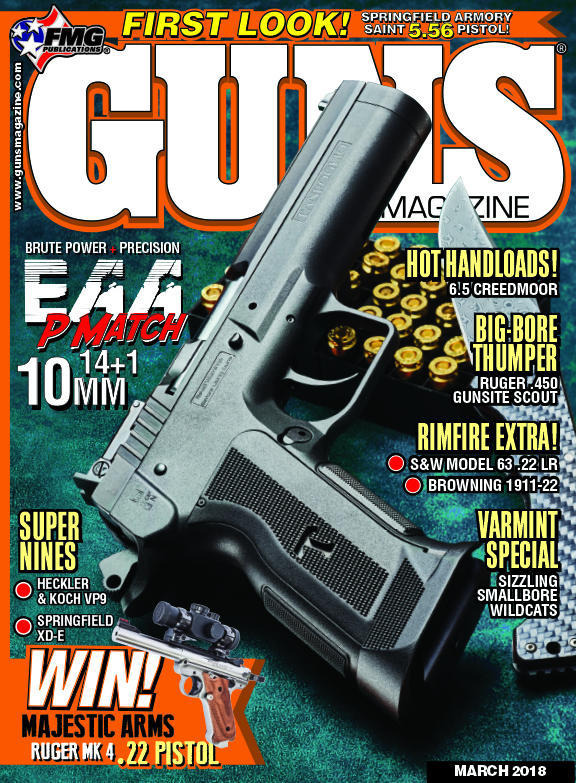 The March issue of Guns Magazine from FMG Publications hit shelves recently and featured another Italian beauty. Pictured on the cover is a powerful, polymer, competition-ready pistol that is a shining example of the expert Italian craftsmanship found in all Tanfoglio pistols (and on many a winner’s podium worldwide) for decades. You may recognize this sleek pistol, as well as its sibling, from the EAA Corp website and various advertisements over the last year but we’ll revisit that in a moment. First the editorial… on the editorial (or the “why you should pick up a copy and read it already” paragraph).

In the 8-page GUNS Magazine centerpiece editorial, John Taffin thoroughly explores the merits of the EAA imported, Polymer pistol from design and packaging, to a full-on field test. He runs multiple loads and brands of ammunition and keeps a detailed record of performance. Taffin goes on to share with his readers, in-depth historical details surrounding the origins and intersections of Tanfoglio, EAA Corp and the famed 10MM cartridge. His historical recollections are detailed, vivid and have been drawn primarily from his first-hand knowledge and experience on the subjects. To say this piece is thorough would be a dramatic understatement. Mr. Taffin clearly knows how to put a pistol through its paces and he pulls out all the stops for this one. We could not have asked for a better proof of concept than the detailed analysis provided in this article and we’re honored to have received it. If you’re considering this pistol, or any pistol, you would be doing yourself a disservice if you didn’t first read this breakdown of the Witness Polymer Limited Pistol.

Now, we circle back to the first paragraph AND the reason for this wordy post. This month’s cover feature is one of the newest competition pistols to join the Tanfoglio lineage and has just begun to hit the United States. In Italy, Tanfoglio calls this firearm the “Witness Limited Custom P” or the Polymer Witness Limited Custom and this is the name found on the cover of the March, GUNS magazine and throughout the article inside. If you’ve already perused the publication, you may have noticed that this firearm doesn’t appear on the EAACORP.com website… under that name. 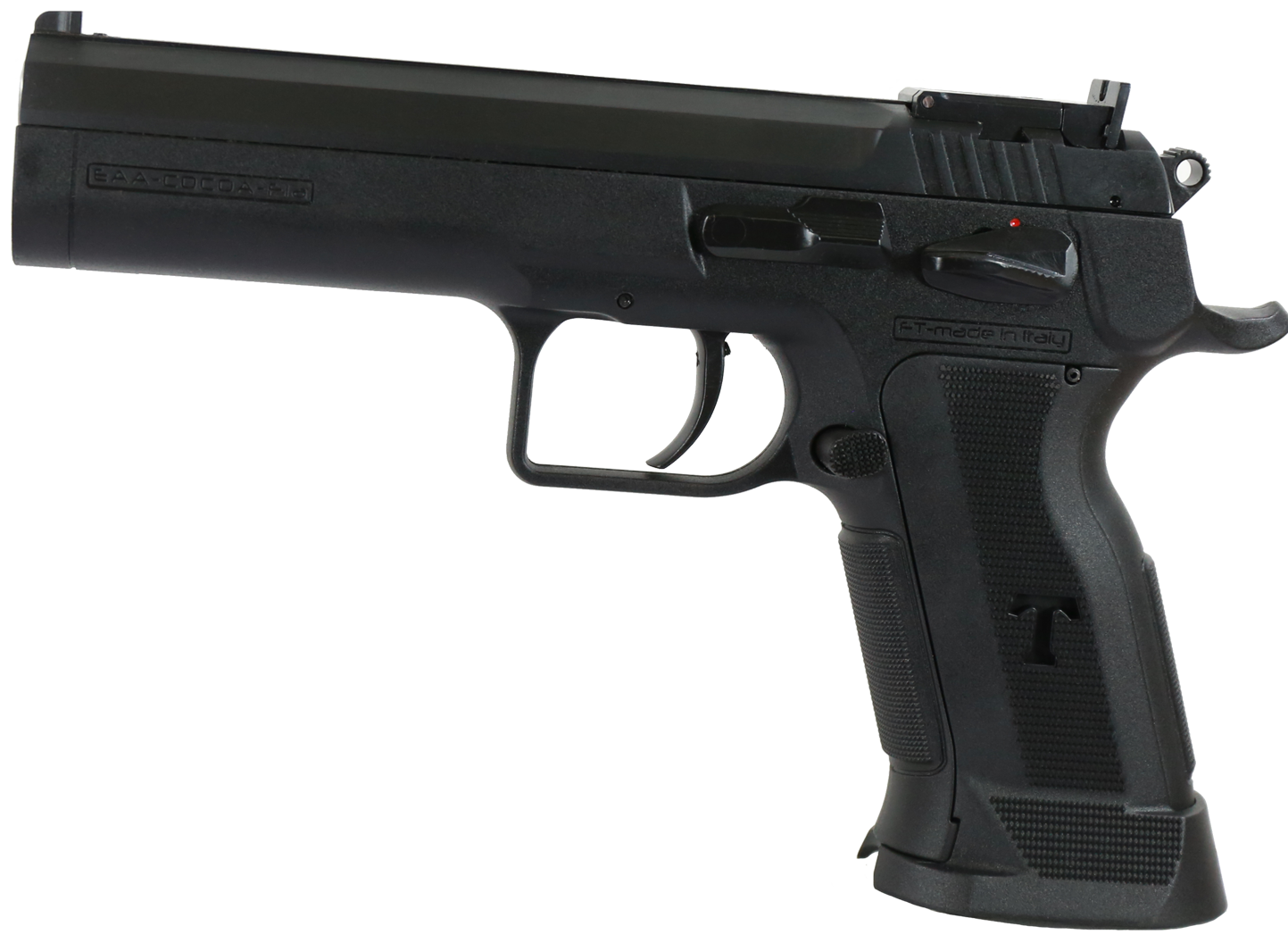 Once the Limited Custom P reaches the US, it becomes the Witness P Match.

Probably should have led with that, huh?

Earlier, we mentioned a “sibling” pistol as well. On our site, you will find a “Witness P Match Pro” alongside the P Match; similar in design but with a few subtle feature differences. The P Match Pro is also a fantastic competition pistol and worth a look if you’re in the market for a SA/DA trigger and an accessory rail. The Italian name for this pistol is “Witness Stock III P”, if you find yourself checking out the Tanfoglio catalog. 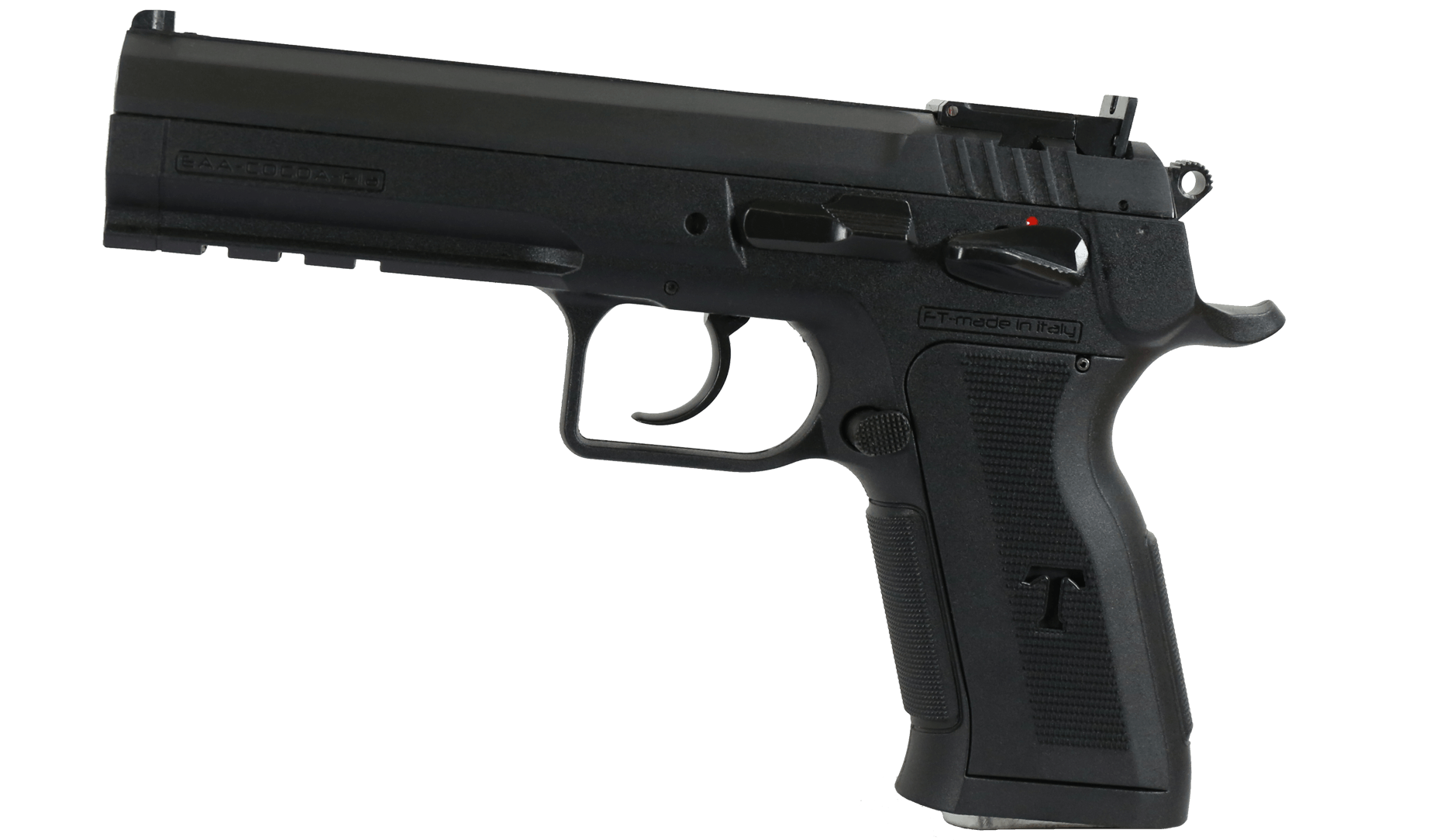 In summary, we are honored to be featured on the cover of the March issue of GUNS Magazine and in such an in-depth article. We hope that this has helped to clear up any confusion caused by the difference in names between Italy and the US. Thank you for reading this far!